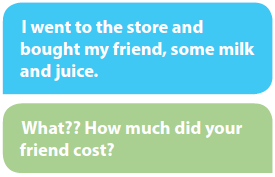 Grammatical errors in your writing will compromise the value of your ideas. A reader is unlikely to take your ideas seriously if they are poorly written. This workout covers some common errors in academic writing. If you really struggle with basic grammar, you might want to explore a wider range of support.

In this workout, you will practice three strategies for improving the accuracy of your writing:

Sentence fragments are very common in student writing. When the focus is on working out the ideas, we sometimes don’t pay enough attention to how they are expressed. Incomplete ideas can sometimes be presented as proper sentences.

To fix a sentence fragment, it is necessary to write a complete thought. Look for the main subject and the main verb as the basis of a good sentence. Sometimes you will need to rewrite the sentence, and other times a comma could be used.

Remember – commas don’t have enough “glue” in them to stick sentences together; they need help.

The solutions in the example use different linking words to join the two ideas together. A period can be used to simply make two distinct sentences. However, remember that we use linking words to shape and refine our meaning. Look carefully at the way the small linking words can shift the meaning in each sentence. Note the different punctuation required for “however,” which is not a conjunction!

Modifiers are words or groups of words that describe something in the sentence. If they are in the wrong place, the sentence will not make sense. In the example, the modifier “recently” could refer to the changes in the schedule or to the verb “affected.”

To reduce any confusion, restructure the sentence to ensure the use of the modifier is clear.

Mixed constructions happen when a sentence starts in one grammatical pattern, but ends in another. This happens when we start to say one thing but change our minds, or when we don’t think through what we really want to say.

In the example, “By practicing our skills” cannot be the subject of the verb “was.” This does not make sense.

The key to solving mixed constructions is finding the logical subject of the sentence.